Ever feel like ringing a bell requires too much effort? Ever wish you could automate it to ring when something – like a sale – happens? If you responded "yes" to at least one of these questions, fret not. There is now a solution: BellBot.

This tutorial will guide you through building your own BellBot to automate bell ringing! The BellBot system is made of:

The Arduino Uno is a microcontroller board based on the ATmega328P chip. It's a popular board due to its low cost, ease of use, open-source nature, and strong community. We will use it as the interface between our node.js server and the servo.

A servo is a device that has an output shaft whose angle can be precisely controlled through an input line. Our servo will be responsible for striking the bell. To do so we attach an arm to the servo's output shaft and align its end with the bell, as seen in the video. Using a pencil for the servo's arm is a fast and easy option for prototyping.

A small basic breadboard and some jumper cables are perfect for fast prototyping. In this project we'll be using the power rails to provide common +5V and GND (ground) nodes.

We'll be powering the system via USB in this project. Thus, adding smoothing capacitors should help stabilize the circuit and protect against current spikes. A 200uF capacitor works well.

Set up the circuit

Follow the diagram and schematic below to set up the circuit.

Diagram for a USB-powered BellBot 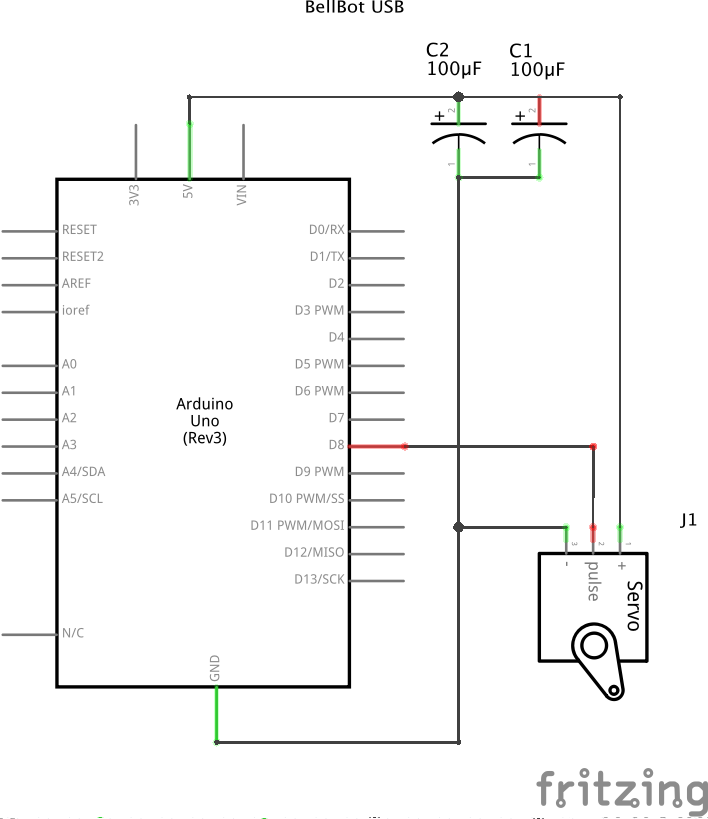 Schematic for a USB-powered BellBot

Note: If you'd rather power the system through an external power supply, read Using an External Power Supply under the Notes section. 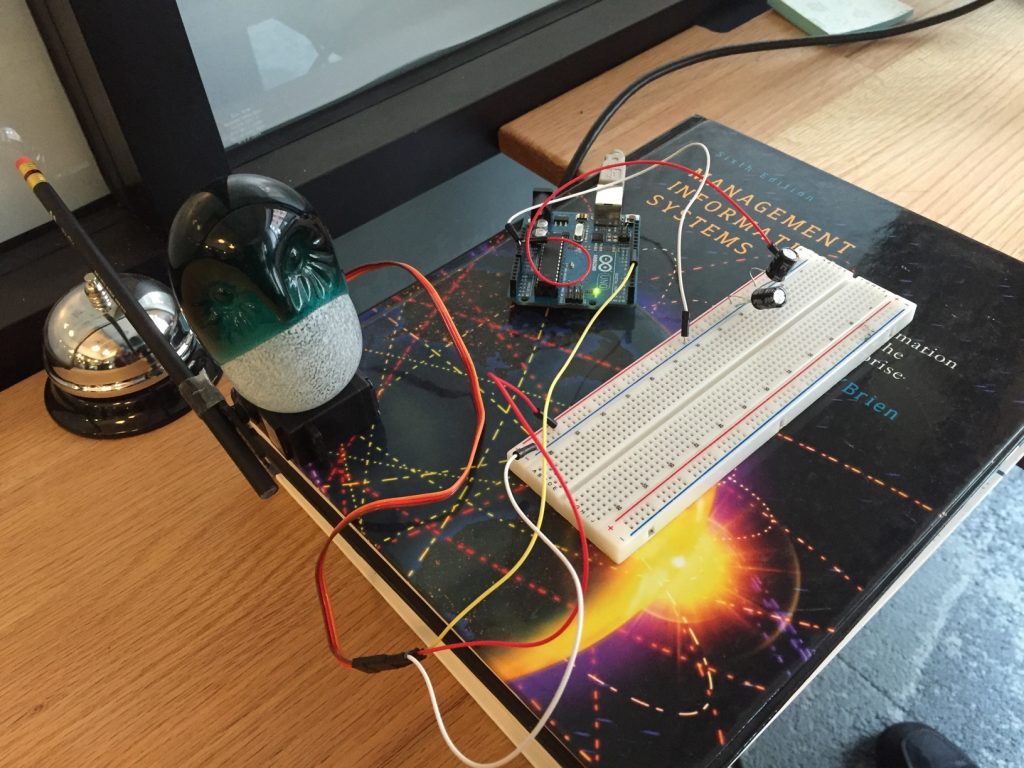 The Arduino code will consist of the standard firmata example included in the IDE. The Arduino IDE is the environment in which we write and upload sketch code to the Arduino Uno. You can download the IDE here.

Writing our own Arduino sketch to control the servo is also an option. But, we would lose the abstraction and simplicity of controlling the hardware within node.js. Checkout Sketch code under the Notes section if you're interested in writing your own Arduino code.

We will be using node.js as our local web server. It will listen for incoming POST requests to the /ring route and relay them to the Arduino. Node.js describes itself as "a JavaScript runtime built on Chrome's V8 JavaScript engine. Node.js uses an event-driven, non-blocking I/O model that makes it lightweight and efficient. Node.js' package ecosystem, npm, is the largest ecosystem of open source libraries in the world." You can read more about it here.

If you cloned the latest BellBot code, you only need to run,

npm will look at the package.json file and install all the required modules.

This module parses command line arguments that we supply. Optional arguments include:

If the BELLBOT_KEY environment variable exists and no key is supplied in the arguments, the server will authenticate incoming requests using the BELLBOT_KEY. We explain how to set up a BELLBOT_KEY later.

This module creates an object that describes the BellBot's behavior. It uses our args.js module to override default settings. Note that the URL is initially blank. We later set this URL to the unique public URL that ngrok supplies us.

This module provides a constructor for a servo controller. Note that the controller's timeout property corresponds to the processing delay – that is, the delay between sending requested commands.

This is the main entry point of the app. The file:

If you want to add some basic authentication to verify requests with a password, create a .bellbotrc file in your home directory with a specified BELLBOT_KEY:

Next time you start your BellBot server, it will authenticate requests with that specified password. The incoming POST requests must have a key or token body parameter that matches the password.

Boot up the BellBot by running

in the command line.

will start the BellBot with:

It is important to make sure BellBot is behaving properly before unleashing it upon the world. After starting your BellBot,

A neat way to automate bell-ringing is to use Slack. In slack, you can add and configure outgoing webhooks. For example, let's add a webhook that sends a customized POST request whenever a message beginning with :bell: comes in. 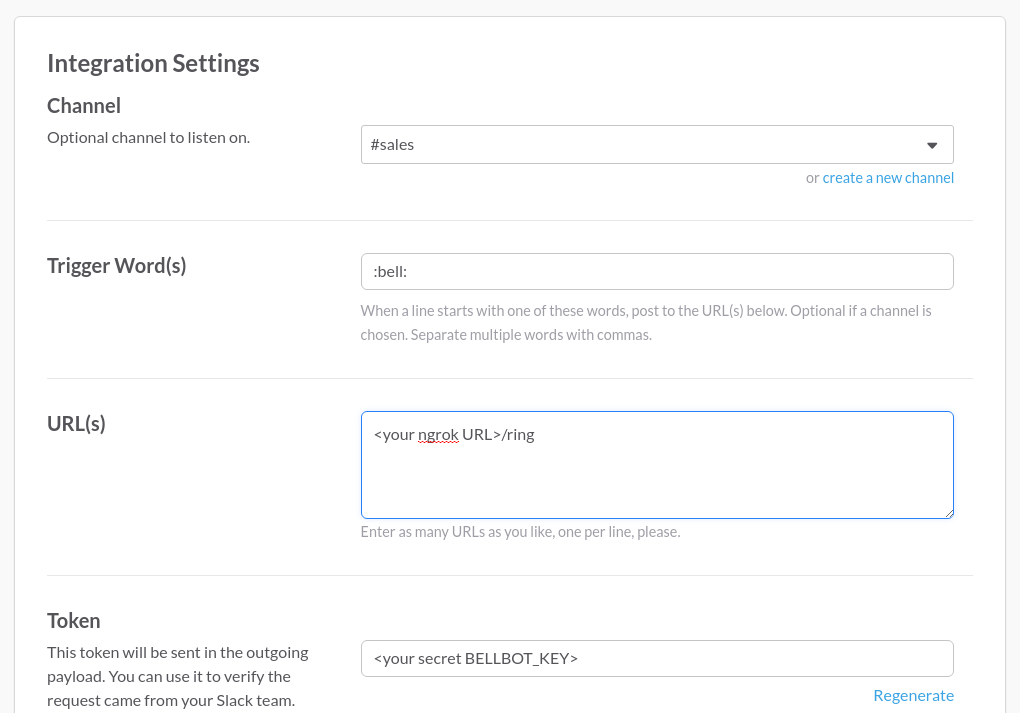 Now all that's left is to make sure that the specified channel receives an automated message that triggers the webhook whenever a sale occurs.

A sales Slack channel that listens for incoming :bell: messages.

A servo uses error-sensing negative feedback to correct and maintain its shaft's angle. The signal sent to the input is a PWM voltage signal. The width of the pulse is what controls the angle of the shaft. Check out this Seattle Robotics guide for more details.

Servos are notorious for drawing lots of power. When using USB power only, the 5V output on the Arduino is what powers the servo.The high current drawn during the servo's rotation may exceed the limits of the USB ports (often ~500mA at 5V). When the current exceeds this threshold, the host computer may disable the port. Additionally, the Arduino may reset and behave erratically due to voltage sags. Check the servo's data sheet for its idle, running, and stall currents. You want them to be low enough to be supplied via USB. Adding a capacitor in parallel to the 5V output and ground can help protect against these undesired effects.

To avoid these concerns altogether, follow the diagram and schematic below to set up an externally-powered BellBot. 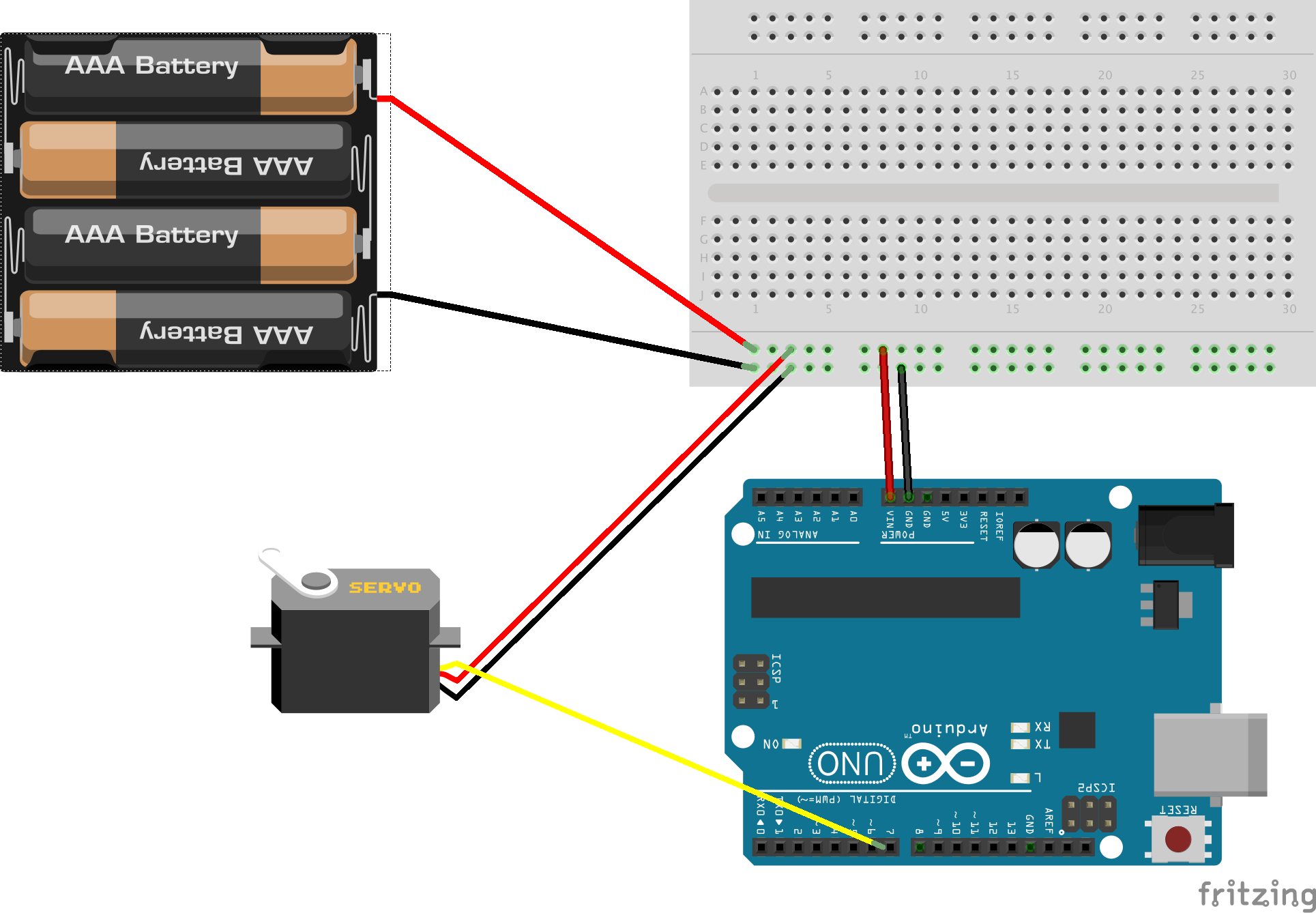 Diagram for BellBot running on an External Power Supply. 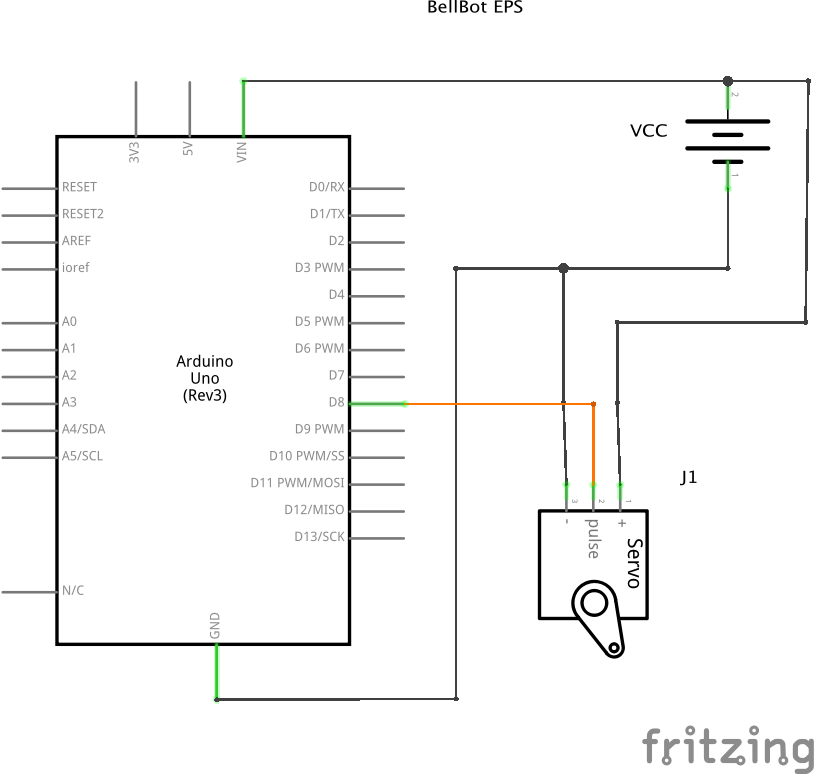 Schematic for BellBot running on an External Power Supply.

An alternative option for BellBot's software is to write your own Arduino code. For example, the following sketch listens for the 'R' character to ring the bell.

The node.js server code would need refactoring. It would no longer require the whole Johnny Five module, and would use just the Serialport module to send data to the Arduino in a more barebones fashion.

Enhance your BellBot by implementing these ideas:

More routes to your express server would expand the possible types of requests. For example, a /sweep route could cause the servo to begin sweeping. Or, if there are many bells and servos, a REST API could allow a user to control each servo.

A web app or mobile phone app for this project could allow users to monitor or control the states of the servos. Admins or users could analyze or act on statistics and data logs of requests.

LEDs could light up whenever the servo is working or a request comes in. A network of servos could handle different types of requests. Light sensors could control the operation state of the servos (on if the lights are on). These are just some ideas!

Rather than exposing the system as a prototype, you could build a professional PCB and enclosure to abstract away the system.

Use the Raspberry Pi

It should be straightforward to port this project to a Raspberry Pi. The node.js server would run on the Pi itself, with the servo connected to its GPIO pins. No USB connection would be necessary.